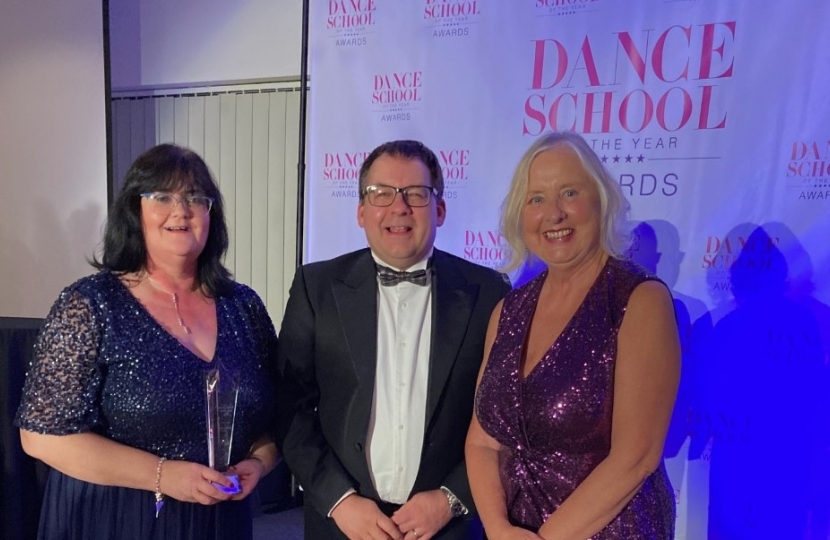 A BORDERS dance school has been recognised by Members of the Scottish Parliament and the leader of Scottish Borders Council for the work they have been doing teaching dance students from the area.

Fiona Henderson School of Dance was awarded Dance School of the Year at an international black-tie event in Devon last week.

The school offers over 100 classes a week with various dance styles available. They provide lessons from their dance studios in Biggar, Galashiels, Jedburgh, Melrose, Moffat, Peebles, Hawick and Selkirk.

Craig Hoy, a Conservative MSP for South Scotland, put forward the motion for the dance school’s achievement to be recognised by Members of the Scottish Parliament.

Mr Hoy said: “I am delighted to submit this motion for the Fiona Henderson School of Dance to be recognised and congratulated by Members of the Scottish Parliament.

“Dance schools do not often receive the recognition which they deserve, but Fiona Henderson School of Dance has been a fantastic part of the community which has benefited hundreds of local people by providing motivation, exercise and fun for its many students.

“I look forward to working with the school in the future to help raise awareness for the health and well-being benefits which can be provided by dancing.”

The leader of Scottish Borders Council, Shona Haslam, added: “It’s great to see a local business doing so much for our area and being recognised at an international awards ceremony.

“We are very proud of the students and teachers at the dance studio and would like to pass on our congratulations to the school for this great achievement.”

The Motion, which has been presented to Parliament, reads: “That the Scottish Parliament congratulates Fiona Henderson School of Dance on being named Dance School of the Year 2021;

“Notes that the school was established in 1985 and now has over 350 pupils ranging from 13 months old up to adult, that the school offers over 100 classes a week in a wide range of dance styles in Biggar, Galashiels, Jedburgh, Melrose, Moffat, Peebles, Hawick, Selkirk;

“Understands that The Dance School of the Year Awards was founded by Anne Walker MBE to celebrate the achievements of dance schools who so often do not receive the recognition they deserve, that 2021 saw the largest ever number of entries and an increasing international dimension with several international schools being announced as finalists and prize winners and that there were 25 prizes awarded for different categories and sizes of school, and ultimately one overall Dance School of the Year prize which was awarded to Fiona Henderson School of Dance.”