Craig calls for parliamentary debate on future of Edington Hospital 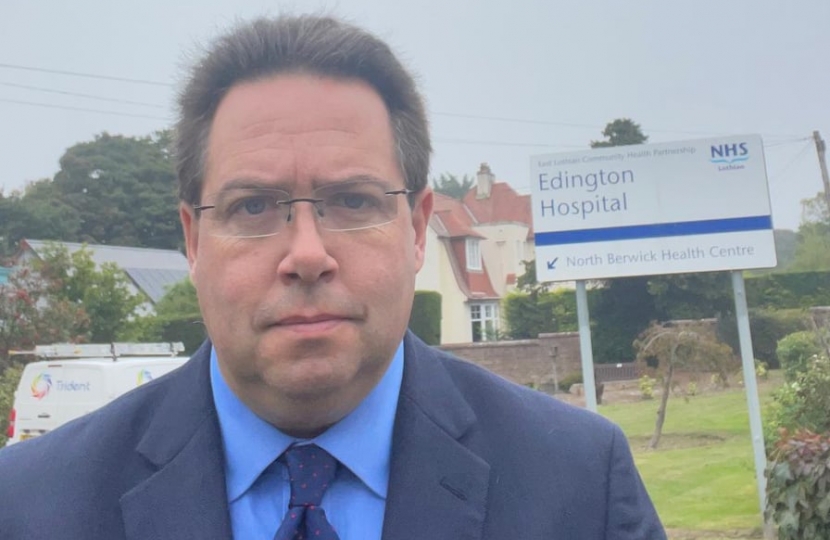 Craig Hoy, a Conservative MSP for South Scotland, has this week put forward a motion to the Scottish Parliament on Edington Hospital and is seeking a parliamentary debate on the future of the hospital in the coming weeks.

The move took place without consultation, and an online petition to ‘Save the Edington Hospital’ which launched last week has already received over 6,000 signatures.

Craig hopes the motion he has submitted will gather the necessary support of members of the Scottish Parliament so that the future of the hospital can be debated in parliament. To be eligible to be selected for a ‘Members Business’ debate the motion needs to be supported from MSPs from 3 of the 4 official party groups at Holyrood.

Craig has also this week launched a survey for residents on the future of Edington Hospital. He is asking residents to take part so that he can demonstrate, given the lack of consultation on recent changes, the strength of feeling about the hospital and the local community’s determination to keep it in place.

Residents can take part in the survey by going to www.craighoy.co.uk/edingtonsurvey.

Putting forward the motion, Craig said: “Since the announcement of the closure of inpatient services, I have been contacted by residents, community groups and health professionals – all of whom are gravely concerned about the future of the hospital.

“Patients do better when they are in their own communities, which is why local health services are so important.

“I am deeply concerned that this will be used as an excuse to permanently centralise inpatient services in East Lothian and to effectively close the Edington.

“This decision was taken without community consultation and that was wrong. The views of local people should always be listened to before changes as important as these are made.

“That is why I think it is important that the future of the hospital is debated in public, in full in parliament where Scottish Government ministers can outline what their plans are for the hospital.

“I have already written to the Chief Executive of NHS Lothian and the Scottish Government to express my concerns and to seek reassurances that inpatient work and admissions will return to the Edington Cottage Hospital in the near future.

"I am also organising a community survey of people in the area. I want to know your views on the closure of the Edington and I would urge everyone to take part by going to www.craighoy.co.uk/edingtonsurvey.

“I know how strongly people feel about the Edington and having more health facilities in our area and I want to be able to demonstrate that clearly to NHS Lothian and the Scottish Government.”