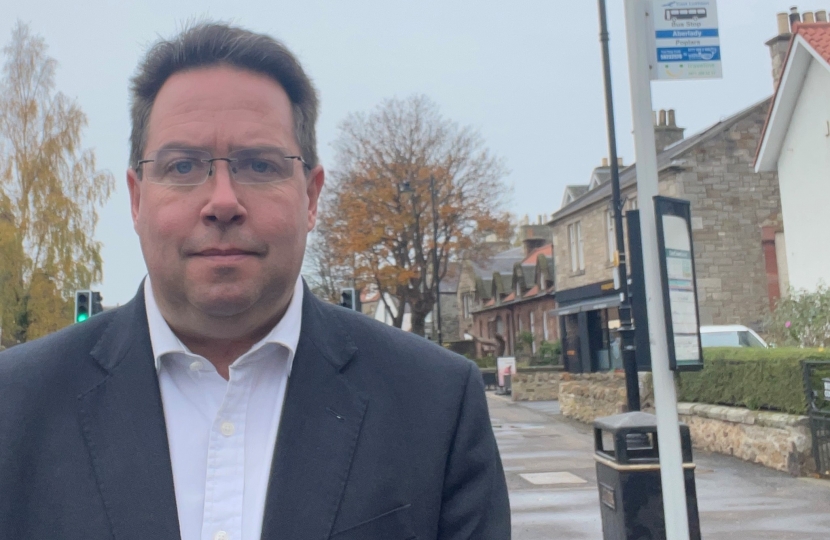 LOTHIAN Buses have their “heads in the sand” over the suspended X5 bus service which ran between North Berwick and Edinburgh according to Conservative MSP for South Scotland Craig Hoy.

The X5 bus was suspended last year by East Coast Buses, a subsidiary of Lothian Buses, following the introduction of national lockdown restrictions. The service ran through North Berwick, Dirleton, Gullane, Aberlady and Longniddry directly on to Edinburgh via the A1.

Commuters from Dirleton, Gullane and Aberlady now face an extra hour on to their daily commute into Edinburgh without the X5. For those communities there is no alternative direct public transport link into the city other than the longer 124 bus service which stops at Prestonpans, Wallyford, Musselburgh and Portobello.

An online petition launched by Craig Hoy MSP last month calling for the reinstatement of the service has now received over 900 signatures.

Mr Hoy claims he has contacted Lothian Buses on three occasions to organise a meeting to discuss the future of the service, but has received no response back.

He said: “In early October my office contacted East Coast Buses who issued a standard response outlining the reasons for continued withdrawal of the service, including challenges with recruitment, the need to prioritise key services and the focus on delivering the 124 service.

“I recognise these challenges, but I also recognise they apply across all routes across the whole of the Lothians and are not confined to the X5 route.

“After a number of residents living in Dirleton, Gullane, Aberlady and Longniddry reached out to me about the X5 bus, I launched a petition calling for the reinstatement of the service. The petition currently has over 900 signatures.

“I wrote to East Coast Buses on two occasions requesting a face to face meeting in order to present the petition and to discuss the specific impediments and resource allocations which are preventing the reinstatement of the service, and followed this up with a third letter to the Interim Managing Director of Lothian Buses - however my correspondence has not been acknowledged.

“I am also aware that others have tried to engage with them on this issue, including the submission of a detailed proposal to change local services to allow for the reinstatement of the X5 by the Chair of Rural East Lothian Bus Users, Harry Barker. To date I understand that Mr Barker’s submission has also not been acknowledged either.

“Lothian Buses is owned by the four Lothian Council areas, which includes East Lothian Council. That makes it accountable to the residents of our community.

“At this point, Lothian Buses have their heads buried in the sand – they cannot keep ignoring our communities.”