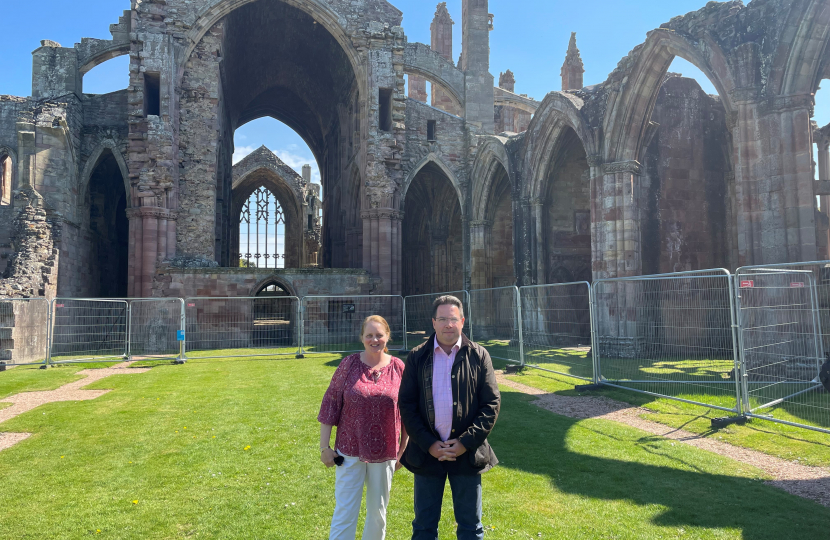 Melrose Abbey, alongside Dryburgh Abbey, Jedburgh Abbey, Kelso Abbey and Greenknowe Tower were closed in January due to high rates of deterioration, partly caused by issues relating to climate change.

The abbey is among the Border’s most popular visitor attractions, which attracted over 60,000 visitors per year into Melrose prior to the coronavirus pandemic.

Historic Environment Scotland Director Dr David Mitchell has confirmed that it will be several years before the abbey is fully reopened due to the risk of falling masonry on the site to members of the public, and deterioration issues at the Abbey.

Craig Hoy MSP said: “While it is understandable that public health and safety must come first, I am very concerned that Melrose Abbey will remain closed for a number of years.

“The abbey is a significant landmark in Melrose which attracted tens of thousands of people into the area prior to the covid pandemic.

“The abbey’s continued closure risks undermining tourism, visitor numbers and local growth, which is why I am calling on the Scottish Government to step up funding to Historic Environment Scotland so that they can carry out work on the site as quickly as possible.”

After significant concerns were raised in the community about the implications that the indefinite closure of the sites is having on local businesses and livelihoods in Melrose, Jedburgh and Kelso, Mr Hoy contacted Historic Environment Scotland and Scottish Ministers. During a meeting with Dr David Mitchell, he requested a timetable be set out on the reopening Historic Environment Scotland operated sites and asked about funding options to reopen sites sooner.

Neil Gray MSP, Scottish Minister for Culture, Europe and International Development, told Mr Hoy: “The Scottish Government provides Historic Environment Scotland with considerable funding: a total of £72.9m in 2020-21 and £75.9m in 2021-22. Historic Environment Scotland is responding to the safety concerns identified at the properties in care using its existing resources of both Government funding and other income.”

“Before the covid pandemic, the abbey attracted over 60,000 visitors a year into the town. A number of local business-owners and residents have been in touch with me to raise concerns about the abbey’s future and the implications of its closure on local businesses.

“I welcome Mr Hoy’s push for the abbey to be reopened as soon as possible and I hope this will provide more clarity for residents on the reopening of Melrose Abbey.”

Craig Hoy, a Conservative MSP for South Scotland, has strongly welcomed the cost-of-living support payments being delivered by the UK Government.

The payments are set to benefit thousands of families and individuals in East Lothian over the coming months.