Future of the Edington Hospital 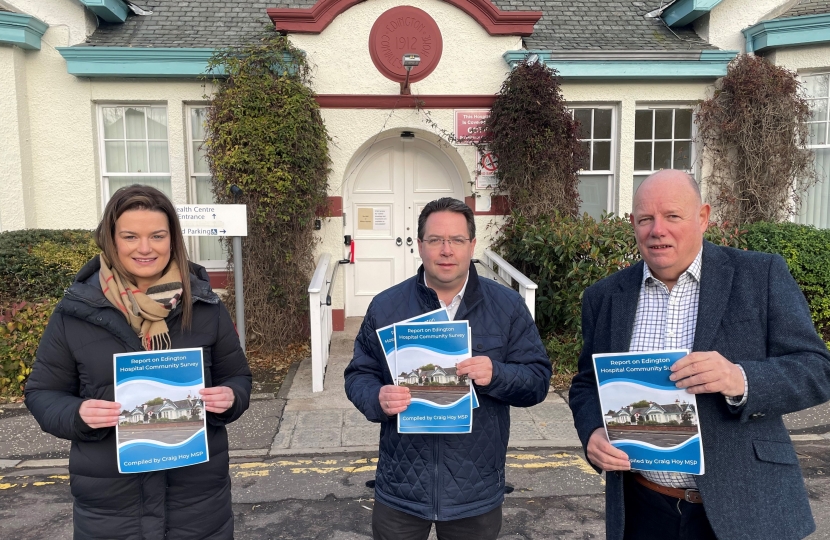 As a local MSP, I believe that local health services are a vital part of local communities.

That is why I think it is important to publish this report into the response of our local community survey. It follows the decision by NHS Lothian to temporarily close in-patient services at the Edington Hospital in North Berwick.

Since officially opening in 1913, Edington Hospital has served the people of North Berwick and East Lothian. The hospital, constructed thanks to a bequest by Miss Elizabeth Edington of North Berwick, is operated by NHS Lothian and is a very respected local facility. Prior to Covid and its closure, the hospital had nine beds and provided medical care for a range of chronic conditions, mobility problems, respite, and end-of-life care.

The hospital also operated a highly regarded minor injuries department and was staffed by 10 nursing staff, eight clinical support staff, and four domestic staff. But with no local consultation, on September 1, 2021, NHS Lothian announced the closure of the Edington Hospital due to staffing constraints at other facilities. This plan saw the six inpatient beds, and the staff who support them temporarily relocated from the Edington Cottage Hospital to the East Lothian Community Hospital in Haddington. The hospital’s Minor Injuries Unit was effectively downgraded, replaced by a Community Treatment and Care (CTAC) unit. NHS Lothian announced that there would be a quarterly review to determine whether services would return to the Edington Hospital.

The first review takes place on December 9, but NHS Lothian has already signaled that it is presently unlikely that the facility will be re-opened at this stage, as wider winter and Covid pressures persist.

I am concerned that these changes were made without any form of community consultation. In recognition of, and in response to, this I have been working closely with local residents and campaign groups. The views of the public are incredibly important when making decisions about public services and designing services. When decisions are made centrally, the services they create will not be able to meet the demand and needs of local communities.

That is why I took the decision to undertake a community survey in North Berwick, and the surrounding area, to gauge the views of local people on the reduction of services at the Edington Hospital. The survey was posted to every household in the North Berwick Coastal ward, and an online version was available via social media for those outwith the local area.

In total, we secured the views of 1,929 people from the North Berwick Coastal ward and across East Lothian. This report includes the key data from the survey and notes some of the key responses from local residents who have been treated, or had loved ones treated, at the Edington.

I thank all those who took the time to respond to this community survey which ensured that their voices were heard. It is worth noting that 97% of those who responded are opposed the service changes at the Edington Hospital.

Given the scale of the response, it is imperative that the clear community views contained within this report are heard by NHS Lothian as they make their decision on whether to reopen the Edington on December 9 - and in any future reviews of local services.