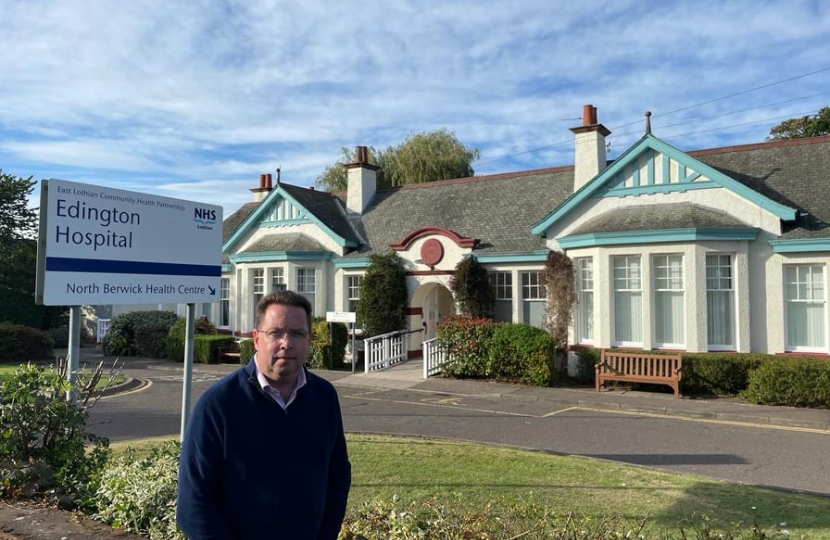 A COMMUNITY survey organised by South of Scotland MSP Craig Hoy has found that 97% of respondents are opposed to the closure of inpatient services at Edington Hospital.

The survey was sent to residents of North Berwick, Gullane, Dirleton and the surrounding area and was available online for anyone to share and complete.

Edington Hospital has been closed since the 13th of September and inpatient services have been temporarily moved to East Lothian Community Hospital in Haddington which is due to be reviewed in December.

The decision to close services was taken without community consultation and this prompted Mr Hoy to organise his own survey of local residents.

Over one in seven households from the North Berwick area have responded to Mr Hoy’s survey, with 1684 local residents opposing the closure of inpatient services at Edington Hospital and just 26 supporting its closure. 29 indicated that they were not sure.

The survey also took the opportunity to ask residents whether they supported the expansion of health care facilities across East Lothian – with 92% supporting this and just 2% opposed.

Commenting on the survey results, Craig said: “It’s no surprise that an overwhelming majority of residents from North Berwick and the surrounding area oppose the closure of services at Edington Hospital.

“The Edington’s nurses have provided critical care for many patients in the area over the years, and as these results show they are a valued part of our local community.

“I believe that the large call from residents for an expansion of health care facilities is hardly surprising. Given the huge expansion of home building and the following struggles that has caused for people, for example, in accessing GP appointments across the county, it is clear East Lothian needs and deserves more NHS spending from the Scottish Government.

“I look forward to presenting these findings to key organisations such as NHS Lothian and the Scottish Government shortly.

“In the meantime, you can still post your survey to me if you have not already done so, or you can take part online at: www.craighoy.co.uk/edingtonsurvey.”

Craig Hoy has also signalled his support for a protest rally due to take place in North Berwick next week.

He commented: “I am excited to attend Hands Around the Edington’s rally on Sunday 7th of November to show my support for the Edington. We must rally behind the campaign to protect this vital community healthcare service.”