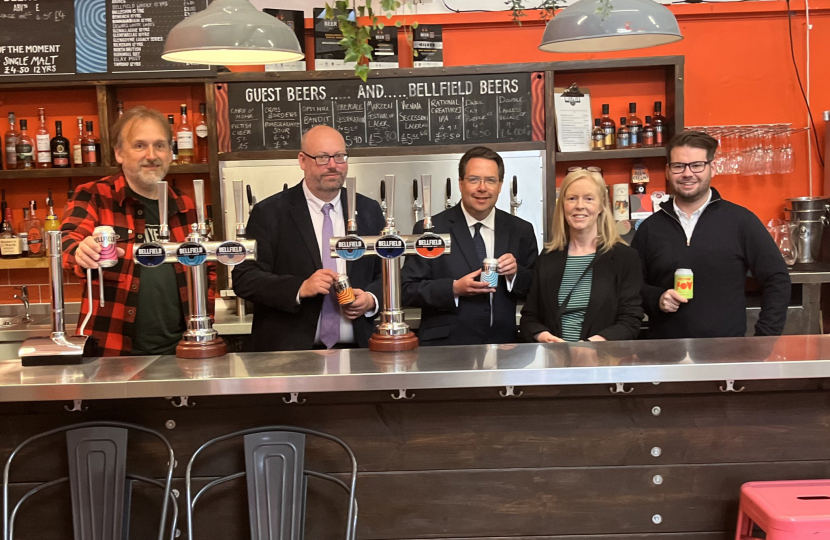 A new cross party report launched by Craig Hoy MSP has warned that the chances of Scotland’s Deposit Return Scheme (DRS) successfully going live on time, within its full scope, are vanishingly thin and unless serious defects are addressed the scheme will not succeed and may prove a very costly failure.

The recycling scheme - which sees consumers charged a 20 pence deposit when they buy drinks containers – is due to go live in August 2023. However members of the Cross-Party Group on Beer and Pubs has called on the Scottish Government to urgently take time out to clarify and reappraise the scheme and that a fundamental review of the net benefits of the scheme is required.

This comes as the Scottish Minister Lorna Slater considers the findings from her second ‘independent gateway review’ carried out last month to look at the feasibility of delivery. A similar exercise last year led to a delay in the DRS launch date.

The report, The Impact of the Scottish Deposit Return Scheme, follows an inquiry carried out by MSPs which took written and oral evidence from a broad section of witnesses including small brewers, pub owners, online retailers, local authority representatives and Circularity Scotland. Witnesses told the inquiry that a huge amount of detail was yet to be decided before they could fully understand what steps to take and that it’s further complicated by DRS imposing de-facto barriers to trade at Scotland’s borders.

They warned of unintended and negative consequences for consumers as price rises and the range of products would be reduced, as well as for health policy as DRS distorts the Minimum Unit Pricing. Particular concerns were raised about fraud through online sales and ‘booze trips’ across the border into England as well as the impact on Scotland’s small independent brewers, hospitality and retailers. These risks were increased by the recent decision of the UK Government to not proceed with DRS for glass, which creates further logistical problems and costs.

Commenting on the report, Hoy said: “Everyone understands that we need to delivery circularity and net zero, but to be successful the scheme has to be effective. It’s clear from the evidence we heard that the Scottish DRS is far from ready and if these details are not addressed it will not be viable. Scottish producers and retailers are still recovering from the pandemic and the Ukrainian conflict is hitting supply chains, energy and costs. The Scottish Government needs to carefully consider our recommendations so that we get this right.”

Cross Party Group member Fergus Ewing MSP said: “All the witnesses we heard from wanted to see a workable scheme in Scotland but their view was that it would be easier and less costly to do this on a pan-UK basis, especially when different containers are included. The risks of the Scottish DRS failing are too high to get this wrong and urgent action is needed from the Minister to ensure these issues are addressed urgently.”

As well as an urgent review, the report recommends that the Scottish and UK Government work together to align their schemes so that there is a single market for brewers and retailers. Without doing so there will be three different markets with knock on impacts of complexities, costs and wastage. It also argues for a phased introduction of products, starting with plastic, would build consumer understanding and allow the infrastructure to develop.

Particular concerns were highlighted about smaller businesses, such as Scotland’s independent brewers, bottle shops and online retailers with the costs being disproportionately felt by smaller businesses. It recommends that a de-minimis threshold could protect these businesses while the scheme beds in.

Similarly, businesses said that there is no way to deliver the online take-back service, where empty containers are collected from people’s homes. The report suggests that this should be delayed from the rest of the scheme until a cost effective and environmentally positive solution has been found.

Jamie Delap from Fyne Ales commented: “We need to get to net zero, but will this scheme make a meaningful impact with all the complexities and changes that have come about since it was first suggested? A lot of decisions still need to be made which need time to feed though the supply chain. This is going to be a very high profile environmental initiative and if it is an expensive failure it will do no favours when it comes to achieving net zero.”